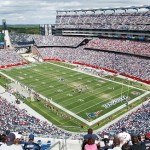 The New England Patriots are a professional American football team based in the Greater Boston area. The Patriots play their home games at Gillette Stadium in the town of Foxborough, Massachusetts. The team is part of the East Division of the American Football Conference (AFC) in the National Football League (NFL).